Yoga and the Iyengar Method

Yoga is one of the oldest systems of personal development in the world. It originated in India more than 3000 years ago and, in recent decades,

There are many different styles of yoga, each offering something slightly different to students. Iyengar Yoga is a form of yoga first developed by B.K.S. Iyengar in India in the 1950s and has become hugely popular worldwide. In 2004 BKS Iyengar was named one of the 100 most influential people in the world by Times magazine.

All teachers of Iyengar Yoga are trained to rigorously high standards and every year are required to maintain their professional development.

In an Iyengar class, yoga is taught in a methodical and progressive way with emphasis on detailed correctness and absolute safety. This  is part of the reason why Iyengar Yoga is trusted and has become one of the most widely performed methods of yoga throughout the world.

There are three key aspects which distinguish Iyengar Yoga

Emphasis is placed on detail, precision and alignment when performing postures (asanas) and breath control (pranayama). In particular, the focus is on creating a healthy and balanced body (and mind) through precision in your practice.

Use of props to help students

The Iyengar method makes great use of props such as belts, blocks and blankets to help you get the most out of your practice. Using props allows you to compensate for lack of strength and flexibility, so your can feel the full benefit of the pose. 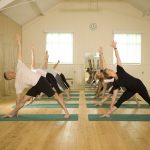 During practice, asanas can be performed in different orders depending on the needs of the student(s). Different sequences are designed to have specific benefits.